Skip to Content
Home Vegetarian What is ‘meat’ from plants, and is ‘just like’ meat vegetarian?
admin

Last week, meat and seafood retailer Licious forayed into the marketing of “mock” chicken and mutton under a new ‘UnCrave’ brand. Also, cricketer M S Dhoni picked up an undisclosed equity stake in plant-based meat startup Shaka Harry, and the California-based Beyond Meat — the global pioneer in the segment — partnered with India’s biggest buffalo meat exporter Allana Group to sell its products in the country.

What is plant-based meat, which is attracting celebrity endorsement? (Beyond Meat has Kim Kardashian as its “chief taste consultant”.)

“Plant-based” refers to products that bio-mimic or replicate meat, seafood, eggs, and milk derived from animals — by looking, smelling, and tasting like them.

Shaka Harry sells “just like” mutton samosas — and also chicken nuggets, momos, and fries with the same prefix. Beyond Meat’s patties, apart from using coconut oil to copy the melty beef fat of a real hamburger, apparently even bleed as they cook — the “blood” coming from a beetroot juice-based liquid.

Plant-based dairy products include ice-cream that isn’t simply frozen dessert that replaces milk fat with vegetable oil. Even the proteins and other solids-not-fat ingredients are sourced from plants.

How are these made?

Animal meat contains protein, fat, vitamins, minerals, and water, just like plants. This biochemical similarity allows for finding analogues in the plant kingdom or making them through mechanical, chemical, or biological treatment of such ingredients.

The challenge lies in replicating muscle tissue that plants don’t have. The unique spatial arrangement of proteins in these tissues is what creates the distinct texture of animal meat. That’s why plant-based mutton samosas, kebabs or keema, having a simpler texture, are easier to make than larger whole cuts of animal meat such as chicken breasts and pork chops.

As for plant-based dairy, the main products are milk from oats, almond, soyabean, coconut, and rice. Among these, oat milk is considered the closest to regular milk in taste and texture. It is also thicker and creamier, as oats absorb more water than nuts or rice during soaking, and more of the grain gets strained for incorporation into the final product. Oat milk players include the Swedish company Oatly and the Bengaluru-headquartered Alt Co.

How big is the industry?

Sales of plant-based meat — which also has other big names like Impossible Foods and the Kellogg Company-owned MorningStar Farms — were flat in 2021, with even milk growing at only 4%.

What is the scope in India?

Probably not much, at least in dairy. Most Indians take naturally to milk, which is a classic “superior food”. The table below shows the share of milk in total household food expenditure going up with rising incomes across different fractile classes (from the bottommost to the top), as per the last National Sample Survey round results for 2011-12. 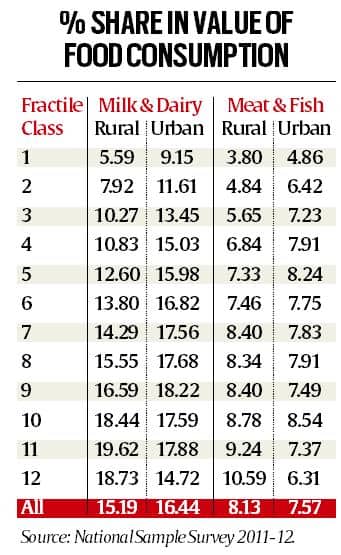 Both milk (which includes ghee, curd, butter, ice-cream and other dairy products) and, to a lesser extent, meat (which includes fish and prawn) are superior foods — unlike cereals and sugar, whose share in the value of consumption reduces with increasing incomes, making them “inferior foods”.

Mark Kahn, managing partner at the agritech venture capital firm Omnivore, says that the market for plant-based milk in the West “has been driven by lactose intolerance, real or imagined”. Those digestive concerns aren’t very serious in India and, at any rate, pale in comparison to the perception of milk as a wholesome food.

What about plant-based meats?

Sandeep Devgan, co-founder of Shaka Harry, is clear that India’s significant vegetarian population isn’t his target market: “We aren’t going after them to eat our products, since they are plant-based.” The company’s focus, instead, is “the meat eaters, both hardcore and not-so-regular”.

Shaka Harry is not placing its products in the vegetarian section in supermarkets. “We are telling the hardcore meat person to replace what he’s eating now with something that has the same taste, aroma, looks, and mouth-feel, maybe once or twice a week. And we are telling the occasional meat eater that you can have our just-like mutton keema or chicken-stuffed paratha at any time,” Devgan says.

Balram Singh Yadav, managing director of the food and animal feed major Godrej Agrovet Ltd, does not see much potential for plant-based meats in India. “In the West, these are viewed mainly as replacements for red meats (beef, pork, and mutton) on account of health concerns. India’s annual per capita consumption of fish and chicken is at 6 kg and 4.5 kg respectively, as against only 700-800 gm for mutton,” he points out.

Agrees Mark Kahn: “Companies here are basically emulating the West with a near copy-paste model. Plant-based meat can have only a niche market relevant for the top 1%.”